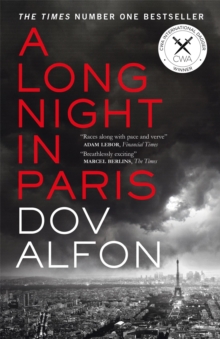 A long night in Paris

From a former Israeli spy, comes the most realistic and authentic thriller of the year.

The Times Number One BestsellerWinner of the CWA International Dagger. A Times, Telegraph and FT pick for Summer Reads 2019, and an FT Thriller of the Year"The year's best espionage thriller" Daily Telegraph Best Books of 2019"Gripping, smart and shot through with dry wit.

But Israel is on a state of high alert nonetheless. Colonel Zeev Abadi, the new head of Unit 8200's Special Section, just happens to have arrived on the same flight. For Commissaire Leger of the Paris Police, all coincidences are suspect.

When a second young Israeli from the flight is kidnapped, this time at gunpoint from his hotel room, his suspicions are confirmed - and a diplomatic crisis looms.

As the race to identify the victims and the reasons behind their abductions intensifies, a covert Chinese commando team watches from the rooftops, while hour by hour the morgue receives fresh bodies from around Paris. This could be one long night in the City of Lights. Translated from the Hebrew by Daniela Zamir