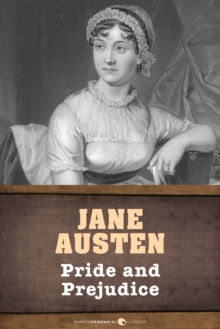 One of the most beloved books of all time, Pride and Prejudice is Jane Austins classic story of the love that blooms, is denied, and finally flourishes between the prideful Mr. Darcy and the prejudiced Elizabeth Bennet. A country squire of limited means, Mr. Bennet is faced with the monumental task of marrying off his five daughters, including his much-loved Elizabeth, while surviving the puerile antics of his wife, Mrs. Bennet, the plotting of the untrustworthy Wickham, and the arrogant Mr. Collins, who is entitled to inherit Mr. Bennets property. Containing some of the most memorable characters to grace English literature, Pride and Prejudice is an enduring classic whose lessons of morality and responsibility continue to resonate with readers two centuries after it was first published.Pride and Prejudice was Jane Austins most popular novel during her lifetime, and is acknowledged as the authors favourite.

It has been adapted into film and television, and has inspired countless sequels and adaptations.HarperPerennialClassics brings great works of literature to life in digital format, upholding the highest standards in ebook production and celebrating reading in all its forms.

Look for more titles in the HarperPerennial Classics collection to build your digital library.