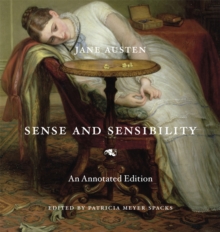 Sense and Sensibility (1811) marked the auspicious debut of a novelist identified only as "A Lady." Jane Austen's name has since become as familiar as Shakespeare's, and her tale of two sisters has lost none of its power to delight.

Patricia Meyer Spacks guides readers to a deeper appreciation of the richness of Austen's delineation of her heroines, Elinor and Marianne Dashwood, as they experience love, romance, and heartbreak.

On display again in the editor's running commentary are the wit and light touch that delighted readers of Spacks's Pride and Prejudice: An Annotated Edition. In her notes, Spacks elucidates language and allusions that have become obscure (What are Nabobs?

When is rent day?), draws comparisons to Austen's other work and to that of her precursors, and gives an idea of how other critics have seen the novel.

In her introduction and annotations, she explores Austen's sympathy with both Elinor and Marianne, the degree to which the sisters share "sense" and "sensibility," and how they must learn from each other.

Both manage to achieve security and a degree of happiness by the novel's end.

Austen's romance, however, reveals darker overtones, and Spacks does not leave unexamined the issue of the social and psychological restrictions of women in Austen's era. As with other volumes in Harvard's series of Austen novels, Sense and Sensibility: An Annotated Edition comes handsomely illustrated with numerous color reproductions that vividly recreate Austen's world.

This will be an especially welcome addition to the library of any Janeite.