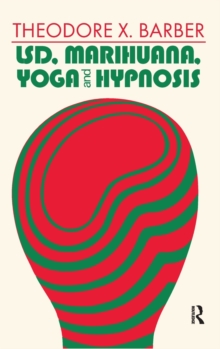 The practice of yoga, hypnosis, and the use of psychedelic drugs to alter psychological and physiological states is not unknown to the study of psychology.

They have been called "soft" studies and labeled unimportant.

This is mostly because they are difficult to study and understand, often focusing on unobservable internal states such as altered states of consciousness, Samadhi, or hypnotic states.

This book, in its approach to thinking about this topic and method for analysis, focuses only on phenomena that can be observed, such as behavioral changes. By centering on only those aspects of the psychological and physiological effects of yoga, hypnosis, and psychedelic drugs which can be measured and analyzed using this new method, Barber distinguishes this book from others in the field.

He asks what overt behaviors and verbal reports are clearly observable when psychedelic drugs are taken, yoga is practiced, or hypnotic-induction procedures are administered.

Instead of treating the phenomena traditionally associated with psychedelic drugs, yoga, or hypnosis as undifferentiated conglomerates, an attempt will be made to set apart and treat separately each of the many phenomena associated with each of these areas of inquiry. This book does not set out to simply demonstrate the importance of psychedelics, yoga, and hypnosis, or to present substantive material pertaining to these topics.

It also treats each topic as continuous with other known psychological phenomena and as an important piece to the puzzle of social psychology.

It differs from most previous treatises in that it does not assume that psychedelics, yoga, and hypnosis can bring out unused mental or physical capacities in man, heighten awareness or give rise to enhanced creativity, or produce altered states of consciousness, suspension of conventional reality-orientation, changes in body-image, or changes in perception.