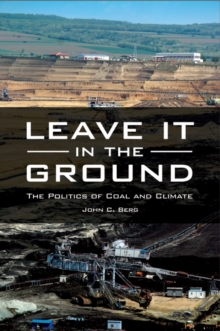 Leave it in the ground : the politics of coal and climate

Employing scientific explanations and hard data, this book shows why coal is such a problem, how the pro-coal forces got to be so powerful, and how those forces might be defeated through political activism. Coal provided the energy to build modern civilization.

Today, we know that if we burn all the coal available, climate change will continue to increase.

But the use of coal isn't purely an environmental issue; there are also political and economic forces at play.

This book examines the politics and environmental impact of coal production and distribution, presenting a clear point of view-that we must shift away from coal use-backed by hard data and supplying specific prescriptions for opposing and regulating the coal industry. Author John C. Berg explains how ending the burning of coal (and of oil and natural gas) is a political problem rather than a technical one; explodes the "clean coal" myth, providing scientific documentation of how burning coal emits more greenhouse gases per unit of energy than any other fuel; and describes how controlling coal use in the United States will also serve to restore the possibility of a meaningful international climate agreement.

Additionally, readers will understand the critical importance of activism-from local to international-in spurring government regulation to control the coal industry, which can only be defeated politically. Examines scientific data to provide a clear explanation-in layman's terms-of the relation of coal to climate changeIllustrates how activism can lead to meaningful government policy changeProvides non-expert readers with a clear understanding of the political issues surrounding coal mining and coal burning as well as the domestic and international politics of coal and climateShows the interconnection of coal's role in labor exploitation, the environmental destruction of Appalachia and other coal areas, and the acceleration of climate change