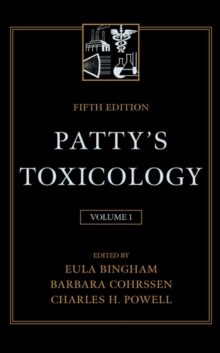 "Patty's" has become one of Wiley's flagship publications in occupational health and safety, and the toxicology volumes give proof to the growth and development of the field of toxicology.

What began as a single volume devoted to the field with the first edition (1948) of "Patty's", has now mushroomed into eight.

This Fifth Edition will permit us to bring about many badly needed changes to the format and organization of the toxicology volumes.

In addition to standardizing the format and sequence in which toxicologic data is presented for all of the compounds, the compounds will be organized according to logical groupings, e.g., the metals will be covered in 23 separate chapters making up Volumes II and III; Vol.

VI will feature three chapters on ketones, two on alcohols, and five on esters; and Vol.

VII will include four chapters on epoxy compounds, two on gycol ethers, and eight on synthetic polymers. The reorganization of chapters in Volumes II through VI by itself will vastly facilitate information searching and retrieval.

Volume VIII, like Volume I, does not cover compounds but rather other major issues in toxicology assessment or other forms of toxic agents.