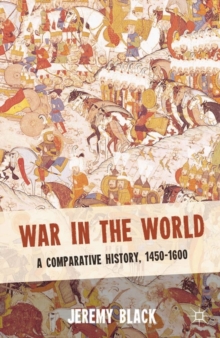 War was a central theme in the world history of the late fifteenth and sixteenth centuries, with military capability and activity central to its states, societies, economies and cultures.

War in the World 1450-1600 provides an account of warfare in the period, placing it in global context.

It offers a corrective to a narrative that has emphasised European developments and obscured the history of non-European military systems and cultures of war.

Highlighting conflict between non-Western powers, which constituted most of the conflict around the world, as well as giving due attention to warfare between Western and non-Western powers, Black emphasises the breadth and variety of military trajectories and connections.

This comparative context also provides a framework for considering the idea of a European-based Military Revolution.

A wide-ranging account of world military history in a period of substantial development, the book will be essential reading for those interested in global history and conflict.

War in the World 1450-1600 is designed as a companion volume to Jeremy Black's Beyond the Military Revolution: Warfare in the Seventeenth-Century World.