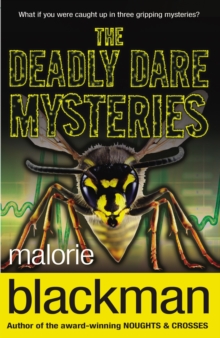 In Deadly Dare, there's a new craze at Theo and Ricky's school.

The rules are simple. Write a dare, put it in the bag and take turns to pick one out.

But on the night Rlcky does his dare and enters the deserted warehouse he disappears.

What secrets does the warehouse hold and how much does new girl Angela know about what happened?

Theo needs to find the answers before it's too late...There's nothing unusual about getting emails from your dad...unless he died a few months ago.

In Computer Ghost Jade asks Theo, Ricky and Angela for help to find out what's going on.

Could the mysterious, desperate messages really be from the ghost of Jade's dad?

One thing's for sure. Whoever - or whatever - is sending the emails wants something badly and they'll stop at nothing to get it...Theo, Ricky and Angela have to become Lie Detectives to uncover the truth about top inventor, Darius Marriott, after he comes to give a talk at school and collapses.

Who is out to get him and why does their friend, Bullet, seem so personally involved?

The friends are determined to get to the bottom of it all - but that could prove to be much harder, and more dangerous, than they think...