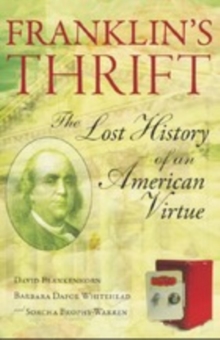 Franklin's Thrift: The Lost History of an American Virtue

The contributors to this volume trace how, from the eighteenth century on, the idea and practice of thrift has been a robust part of the American vision of economic freedom and social abundance. For Benjamin Franklin, who personified and promoted the idea, thrift meant working productively, consuming wisely, saving proportionally, and giving generously. Franklin's thrift became the cornerstone of a new kind of secular faith in the ordinary person's capacity to shape his lot and fortune in life. Later chapters document how in the nineteenth and twentieth centuries, thrift moved into new domains. It became the animating idea behind social movements to promote children's school savings, create mutual savings banks and credit unions for working men and women, establish a federal savings bond program, and galvanize the nation to conserve resources during two world wars.

Historians, enthusiasts of Americana or traditional American virtues, and anyone interested in resolving our society's current financial woes will find much to treasure in this diverse collection, with topics ranging from the inspirational lessons we can learn from the film It’s a Wonderful Life to a history of the roles played by mutual savings banks, credit unions, and thrift stores in America’s national thrift movement. It also includes actual policy recommendations for our present situation.