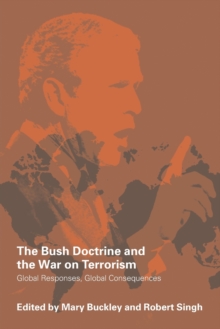 The Bush doctrine and the War on Terrorism : global responses, global consequences

The presidency of George W. Bush has been widely regarded as having occasioned one of the most dramatic shifts in the history of American foreign policy.

The US interventions in Afghanistan and Iraq, the declaration of a 'war on terrorism' and the enunciation of a 'Bush Doctrine' of unrivalled military power, 'regime change' for 'rogue states', and preventive and pre-emptive war together generated unprecedented divisions in the international community.

In this edited volume, leading international experts analyse the nature and scale of the global transformation wrought by the Bush foreign policy in three clear parts: part I examines the extent of the Bush administration's break with prior American foreign policy; in part II, region and country-specific experts assess the responses to the Bush Doctrine and the interaction of domestic and international politics that shaped these. They explore how governments, political parties, the media and public opinion react to US foreign policy and assess the implications for domestic, regional and international politics; part three examines the likely long-term implications of the Bush Doctrine in relation to a set of major thematic issues including: war and peace, the global economy, human rights and the UN.

Providing a balanced and dispassionate assessment of continuity and change in American foreign policy, national/regional responses to it, and the impact of US foreign policy on a set of 'big picture' discrete issues, this book will be essential reading for scholars and researchers of international relations and contemporary history.