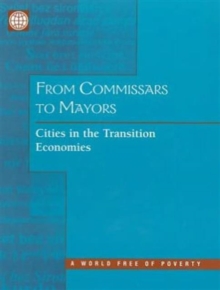 From Commissars to Mayors : Cities in the Transition Economies

While the economies of Europe and Central Asia (ECA) have spiraled downward over the past decade, they have made some progress in other spheres.

Civil liberties and democracy are taking root in many of the ECA countries, and new opportunities are being created and exploited as the region opens to the global economy.

For most ECA countries, however, the transition process remains fragile.

The urban areas have been hit hardest. The closing of state industries and excessive urbanization have left cities impoverished in many of the former socialist countries.

This phenomenon contrasts sharply with developing countries where poverty predominates in the rural areas.

It considers the principal concerns for city management and proposes action plans to achieve a more equitable, sustainable economic environment.

It also identifies priorities and strategies for the region and for the World Bank.