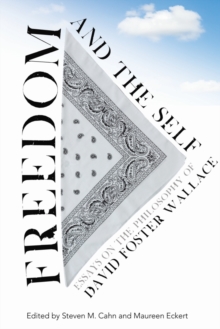 Freedom and the Self : Essays on the Philosophy of David Foster Wallace

The book Fate, Time, and Language: An Essay on Free Will, published in 2010 by Columbia University Press, presented David Foster Wallace's challenge to Richard Taylor's argument for fatalism.

In this anthology, notable philosophers engage directly with that work and assess Wallace's reply to Taylor as well as other aspects of Wallace's thought. With an introduction by Steven M. Cahn and Maureen Eckert, this collection includes essays by William Hasker (Huntington University), Gila Sher (University of California, San Diego), Marcello Oreste Fiocco (University of California, Irvine), Daniel R.

These thinkers explore Wallace's philosophical and literary work, illustrating remarkable ways in which his philosophical views influenced and were influenced by themes developed in his other writings, both fictional and nonfictional.

Together with Fate, Time, and Language, this critical set unlocks key components of Wallace's work and its traces in modern literature and thought.