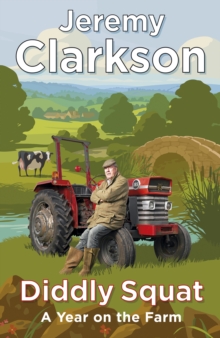 Diddly Squat : a year on the farm

Pull on your wellies, grab your flat cap and join Jeremy Clarkson in this hilarious and fascinating behind-the-scenes look at the farm we're all obsessed withTHE NO. 1 SUNDAY TIMES BESTSELLER________Welcome to Clarkson's farm. An idyllic spot offering picturesque views across the Cotswolds, bustling hedgerows and natural springs, it's the perfect plot of land for someone to delegate the actual, you know, farming to someone else while he galivants around the world in cars. Until one day, Jeremy decided he would do the farming itself. After all, how hard could it be? . . . Faced with suffocating red tape, biblical weather, local objections, a global pandemic and his own frankly staggering ignorance of how to 'do farming', Jeremy soon realises that turning the farm around is going to take more than splashing out on a massive tractor. Fortunately, there's help at hand from a large and (mostly) willing team, including girlfriend Lisa, Kaleb the Tractor Driver, Cheerful Charlie, Ellen the Shepherd and Gerald, his Head of Security and Dry Stone Waller. Between them, they enthusiastically cultivate crops, rear livestock and hens, keep bees, bottle spring water and open a farm shop.

But profits remain elusive. And yet while the farm may be called Diddly Squat for good reason, Jeremy soon begins to understand that it's worth a whole lot more to him than pounds, shillings and pence . . . ________Praise for Clarkson's Farm:'The best thing Clarkson's done . . . It pains me to say this' THE GUARDIAN'Shockingly hopeful' THE INDEPENDENT'Even the most committed Clarkson haters will find him likeable here' THE TELEGRAPH'Quite lovely' THE TIMES