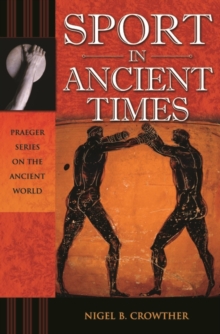 By: Crowther, Nigel B.

Part of the Praeger Series on the Ancient World series

This book looks at the role of sport as practiced in several important civilisations in the ancient world.

It explores how athletics had an importance that extended beyond physical prowess to include military associations, religious ritual, status, politics, and other concerns.

The book has four distinct parts: the Prehistoric Age, Greece, ancient Italy, and the Byzantine Empire.

Beginning with the earliest civilizations, the first chapter examines the military and recreational aspects of sports in prehistoric Egypt, with brief references to the cultures in Sumeria, Mesopotamia and Persia.

The second looks at the sports and games of bronze-age Greece, such as Cretan bull-leaping and the funeral games described by Homer.

In the historic period, the chapters on Greece look at the significance of the ancient Olympic Games.

The book then focuses on the Romans, looking at their famous ideal of "sound mind in a sound body", and the significance of the baths for culture and society.

It also examines the Romans' love of spectator sports such as gladiatorial contests and chariot racing, and how the concept of "bread and circuses" had an important political role. The chapter on the Byzantine Empire focuses on chariot racing and the politically-charged riots of spectators at sporting contests.

The last three chapters look at the status and significance of ancient athletes, the presence (or absence) of women in sports, and team sports and ball games.

Part of the "Praeger Series" on the Ancient World it: provides a study of sports across cultures in the Ancient world; includes both individual and team sports; looks at the role of women in sports; and, compares and contrasts the significance of famous sporting figures in different ancient societies.