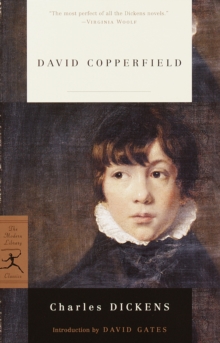 Part of the Vintage classics series

'Like so many fond parents I have in my heart of hearts a favourite child,' wrote Charles Dickens. 'And his name is David Copperfield.'Of all of Dickens's novels, David Copperfield most closely reflects the events of his own life.

The story of an abandoned waif who discovers life and love in an indifferent world, this classic tale of childhood is populated with a cast of eccentrics, innocents, and villains who number among the author's greatest creations.'David Copperfield is filled with characters of the most astonishing variety, vividness, and originality,' noted Somerset Maugham. 'They are not realistic and yet they abound with life.

There never were such people as the Micawbers, Pegotty and Barkis, Traddles, Betsey Trotwood and Mr. Dick, Uriah Heep and his mother. They are fantastic inventions of Dickens's exultant imagination, but they have so much vigor, they are so consistent, they are presented with so much conviction, that you believe in them.

They are extravagant, but not unreal, and when you have once to know them you can never quite forget them.' T.

S. Eliot agreed: 'Dickens excelled in character; in the creation of characters of greater intensity than human beings.' And Virginia Woolf concluded: 'In David Copperfield, though characters swarm and life flows into every creek and cranny, some common feelings--youth, gaiety, hope--envelops the tumult, brings the scattered parts together, and invests the most perfect of all the Dickens novels with an atmosphere of beauty.'