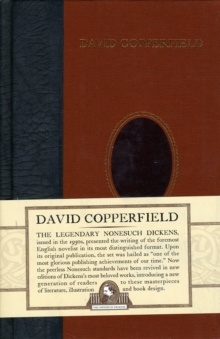 Part of the Nonesuch Dickens series

In "David Copperfield" (1849), once again, issues of class and the differences between public and private standards (represented in the corruption of the wealthy and brilliant Steerforth) are studied, and the power and exploitation of the industrial world are exposed and damned, Classic Dickensian characters here include Mr Murdstone, Copperfield's evil guardian and owner of the wine-bottling factory where David makes his living under appalling conditions; the snake-like Uriah Heap who's vanity leads him to cruelty; Mr Micawber, one of literature's funniest characters and the kind, generous Peggottys, representing all that is good, even in the face of adversity.

Little Emily provides an ill-treated character with whom the reader can sympathise.

This was Dicken's favourite novel...Based on the world-famous "Nonesuch Press" edition of 1937, the text is taken from the 1867 "Chapman and Hall" edition, which became known as the "Charles Dickens" edition, and was the last edition to be corrected by the author himself. "The Nonesuch" edition contains illustrations selected by Dickens himself, by artists including Hablot Knight Browne ('Phiz'), George Cruikshank, John Leech, Robert Seymour and George Cattermole.

The new "Nonesuch Dickens" reproduces the original elegance of these beautiful editions.

Each book is wrapped in a protective, clear acetate jacket.