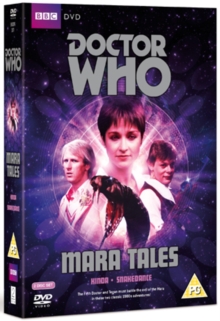 Two adventures from the early 1980s with Peter Davison starring as the Time Lord.

However, the military expediton on the planet has lost several crew members, and the Doctor and Adric are taken hostage by the near hysterical Hindle.

Meanwhile, Tegan's dreams have provided the gateway to an ancient evil, the snake-like Mara.

The Doctor must prevent the Mara from taking over the Kinda and destroying the expedition, as the wheel of creation begins to turn.

In 'Snakedance' (1983), a loose sequel to 'Kinda', Tegan must have made a mistake when she was setting the co-ordinates for the TARDIS, because the Doctor certainly hadn't intended landing on Manussa.

When the Doctor learns that Manussa was once the home of the Sumaran Empire, he realises that an evil force has begun to take over Tegan's will.

This force, the Mara, is planning to use Tegan as a vehicle to retake power on Manussa.

Just as the celebrations to commemorate the destruction of the Sumaran Empire by the Federation are about to take place, the Legend of Mara is about to come true.