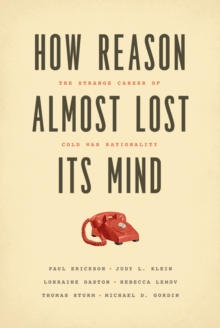 How reason almost lost its mind: the strange career of Cold War rationality - 55423

In the United States at the height of the Cold War, roughly between the end of World War II and the early 1980s, a new project of redefining rationality commanded the attention of sharp minds, powerful politicians, wealthy foundations, and top military brass.

Its home was the human sciences&mdash;psychology, sociology, political science, and economics, among others&mdash;and its participants enlisted in an intellectual campaign to figure out what rationality should mean and how it could be deployed.           How Reason Almost Lost Its Mind brings to life the people&mdash;Herbert Simon, Oskar Morgenstern, Herman Kahn, Anatol Rapoport, Thomas Schelling, and many others&mdash;and places, including the RAND Corporation, the Center for Advanced Study in the Behavioral Sciences, the Cowles Commission for Research and Economics, and the Council on Foreign Relations, that played a key role in putting forth a \u201cCold War rationality.\u201d Decision makers harnessed this picture of rationality&mdash;optimizing, formal, algorithmic, and mechanical&mdash;in their quest to understand phenomena as diverse as economic transactions, biological evolution, political elections, international relations, and military strategy.

The authors chronicle and illuminate what it meant to be rational in the age of nuclear brinkmanship.