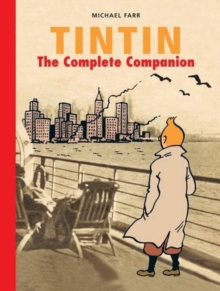 Part of the The adventures of Tintin series

Join the world's most famous travelling reporter in the complete guide to the world of Tintin.The perfect gift for fans of the beloved graphic novel series, old and new. Written by ace Tintinologist Michael Farr, this book is the complete guide to The Adventures of Tintin, including fascinating background information on how the books were created.

Learn how Tintin was based on Herge's brothe, and Captain Haddock on himself!

With fascinating detail Michael Farr also recounts how real people came to be immortalised in the Tintin books. Lavishly illustrated with photographs, illustrations, sketches and maps, this is the fascinating story of the evolution of a genuine comic book classic.

Ideal for fans aged 8 and up. Herge (Georges Remi) was born in Brussels in 1907.

Over the course of 54 years he completed over 20 titles in The Adventures of Tintin series, which is now considered to be one of the greatest, if not the greatest, comics series of all time.