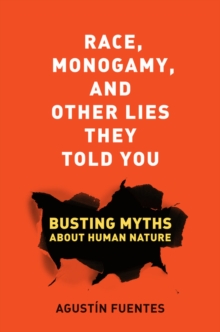 Race, monogamy, and other lies they told you : busting myths about human nature

There are three major myths of human nature: humans are divided into biological races; humans are naturally aggressive; and men and women are truly different in behavior, desires, and wiring.

In an engaging and wide-ranging narrative, Agustin Fuentes counters these pervasive and pernicious myths about human behavior.

Tackling misconceptions about what race, aggression, and sex really mean for humans, Fuentes incorporates an accessible understanding of culture, genetics, and evolution, requiring us to dispose of notions of nature or nurture.

Presenting scientific evidence from diverse fields including anthropology, biology, and psychology Fuentes devises a myth-busting toolkit to dismantle persistent fallacies about the validity of biological races, the innateness of aggression and violence, and the nature of monogamy and differences between the sexes.

A final chapter plus an appendix provide a set of take-home points on how readers can myth-bust on their own.

Accessible, compelling, and original, this book is a rich and nuanced account of how nature, culture, experience, and choice interact to influence human behavior.