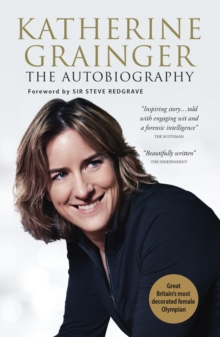 Katherine Grainger is not only Great Britain's finest ever woman rower, but also she has won more Olympic medals than any other female British athlete in any sport.

At Rio de Janeiro in the 2016 Olympic Games, at the age of 40, and less than two years after coming out of 'retirement', with a different partner, she came within one second of retaining her women's Double Sculls gold medal.

On 3 August 2012, on the water at Eton Dorney in the London 2012 Olympic Games, she - and Anna Watkins - had rowed to glory in the women's Double Sculls.

Three times an Olympic silver medallist, she could finally hang up her oars as an Olympic champion to add to her six World Championships and eight World Cup gold medals - but she didn't.

Katherine's story is a remarkable one - proof that nice people can be winners and dedication and hard work pay off.

Incredibly bright, Grainger combined her athletic career with her education and she has degrees from Glasgow and Edinburgh universities and a PhD from London, in subjects as diverse as law, philosophy and homicide.

No wonder she is so much in demand as a motivational speaker.

Katherine Grainger: The Autobiography continues her inspirational story taking in her post-London activities, the return to training, finding a new double sculls partner in Vicky Thornley, the highs and lows of their attempt to qualify for Rio 2016 and eventually their astonishing row to another silver medal.