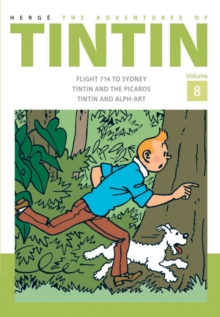 Join the world's most famous travelling reporter in his exciting adventures as he gets mixed up with an aeroplane hijacking in Flight 714 to Sydney and a South American revolution in Tintin and the Picaros.

This volume also includes the unfinished Tintin and Alph-Art, a fascinating insight into Herge's creative process. Flight 714 to Sydney Tintin, Captain Haddock and Professor Calculus are on their way to Sydney, Australia.

Through a chance meeting they are invited to travel on board the private jet of billionaire Lazlo Carreidas.

But then they fall victim to a plot to kidnap Carreidas and are captured by Tintin's arch enemy Rastapopoulos. Tintin and the Picaros Bianca Castafiore has been imprisoned by General Tapioca!

Also accused of threatening Tapioca's dictatorship, Tintin, Calculus and Haddock jet off to the jungle HQ of the revolutionaries, and hatch a plot surrounding the upcoming carnival and Haddock's sudden and mysterious disgust for whisky. Tintin and Alph-Art In an interview shortly before his death, Herge wrote of the last Tintin adventure: "The plot revolves around a tale of forgers ...

The book is set in the world of contemporary art. The narration itself is in the course of evolution. I am still doing my research and I honestly don't know where this story will lead me." Sadly, the tale was never completed, but this unique book gives an insight into the work Herge had done on the project before he died.

At the end, Tintin is about to be cast into a living sculpture by a mysterious enemy - one last cliffhanger for the world's best-loved boy journalist. Join the most iconic character in comics as he embarks on an extraordinary adventures spanning historical and political events, and thrilling mysteries. Still selling over 100,000 copies every year in the UK and having been adapted for the silver screen by Steven Spielberg and Peter Jackson in 2011, The Adventures of Tintin continue to charm more than 80 years after they first found their way into publication.