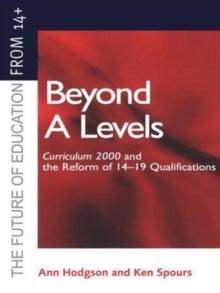 Beyond A-levels : curriculum 2000 and the reform of 14-19 qualifications

Part of the The future of education from 14+ series

Since its introduction over 50 years ago, the A-level has been a constant subject of debate in schools, HE and government.

Sometimes hailed as a 'gold standard', there is now intense speculation about the future of the A-level in particular, but also about post-14 qualifications in general.

The furore about quality and standards which accompanies each year's A-level results has become an annual fixture in the UK press calendar.

With the introduction of Curriculum 2000, and an increasing number of calls for baccalaureate-style examinations, vocational qualifications and more, the need for serious debate - and change in this field is clear.

Based on primary research by two of the leading commentators on the qualifications, this book is a wide-ranging and critical view of the fundamental approaches of the education system in Britain today.

With government action on this subject looking inevitable, this will be a challenging and important book for anyone interested in this debate.