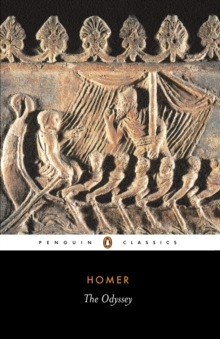 Homer'sThe Odysseyis an epic that has endured for thousands of years, and this Penguin Classics edition is translated by E.V. Rieu, revised by D.C.H. Rieu, and contains an introduction by Peter Jones.

The epic tale of Odysseus and his ten-year journey home after the Trojan war forms one of the earliest and greatest works of Western literature. Confronted by natural and supernatural threats - from the witch Circe who turns his men into pigs, to the twin terrors of Scylla and Charybdis; from the stupefied Lotus-Eaters to the implacable enmity of the sea-god Poseidon himself - Odysseus must test his bravery and native cunning to the full if he is to reach his homeland safely. But the danger is no less severe in his native Ithaca, as Odysseus finds himself contending with the suitors who, in his absence, have begun to surround his wife Penelope...

E.V. Rieu's translation ofThe Odysseywas the first Penguin Classic to be published, and has itself achieved classic status. For this edition, Rieu's text has been sensitively revised and a new introduction added to complement his original introduction.

Seven greek cities claim the honour of being the birthplace of Homer (c. 8th-7th century BC), the poet to whom the composition of theIliadandOdysseyare attributed. TheIliadis the oldest surviving work of Western literature, but the identity - or even the existence - of Homer himself is a complete mystery, with no reliable biographical information having survived.

'One of the world's most vital tales ...The Odysseyremains central to literature'
Malcolm Bradbury