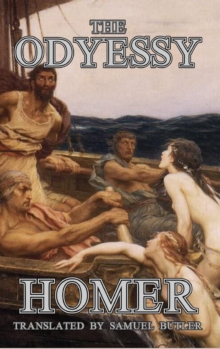 The Odyssey, in part a sequel to the equally famous Iliad, is the second oldest extant work of Western European literature, composed in the eighth century BC.

It tells the story of the Greek hero Odysseus (known in Rome as Ulysses), king of Ithaca, and his ten-year-long journey home at the end of the Trojan War. Odysseus's adventures include:- Being held captive by the nymph Calypso who has fallen in love with him. - A visit to the lethargic Lotus-Eaters who gave two of his men their fruit which caused them to forget their homecoming. - A capture by and escape from the Cyclops Polyphemus, who is blinded by a wooden stake.

Polyphemus tells his father, the sea god Poseidon, who then causes natural disasters which cause Odysseus to take ten years to reach home. - An encounter with the sirens, who draw wayward sailors off course with their songs and temptations.

Odysseus becomes one of the few men to hear the sirens and survive after being bound to the mast of his ship as his sailors row by, their ears covered. - A narrow escape from the sea-monster Scylla. - A stay with Aeolus, the master of the winds who gives Odysseus a bag containing all the winds, except the west wind-which means that the only wind that blows will bring Odysseus to his home in the west.

His greedy crew, thinking the bag contained gold, open it and the resulting storm drove the ships back the way they had come, just as Ithaca came into sight. - An encounter with the cannibalistic Laestrygonians and the destruction of all but one of his ships on their island. - A visit to the witch-goddess Circe who turns half of the survivors into swine after feeding them cheese and wine. - A visit to the Underworld, and much, much more. Originally written as a poem in Greek dactylic hexameter, the title of this classic work gave rise to the word odyssey as meaning any epic voyage.

This version has been completely reset using the classic English translation which converted the poetry to conventional text.