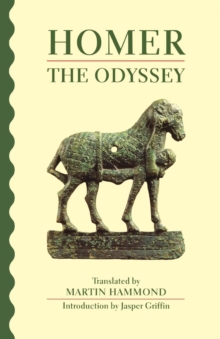 "The Odyssey" is one of the earliest works of European literature, second only to "The Iliad".

These two great epic poems, the astonishing first fruits of Greek civilisation, have together determined much of the course of Western literary culture and imagination. "The Odyssey" tells of the long and painful return of Odysseus from the Trojan War to his homeland of Ithaka, his wife Penelope, and his son Telemachos.

Even after he finally returns, there are enemies to be fought in his house.

The action of the poem covers a huge canvas, ranging widely over time and place, exploring the known and the unknown worlds, involving magic and monsters, gods and ghosts, dangers defied: throughout there runs a strong and eloquent insistence on the humanity of man and the ultimate triumph of good over evil.

It aims to capture as closely as possible both the simplicity and the intensity of Homer's epic.