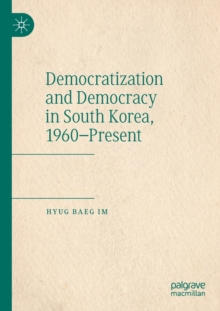 This book analyses democratization and democracy in South Korea since 1960.

The book starts with an analysis of the distinctive characteristics of bureaucratic authoritarianism and how democratic transition had been possible after inconclusive and protracted "tug of war" between authoritarian regime and democratic opposition.

It then goes on to explore what the opportunities and constraints to the new democracy are to be a consolidated democracy, how new democracy had changed the industrial relations in the post-transition period, how premodern political culture such as Confucian patrimonialism and familism had obstructed democratic consolidation, and the improvement of quality of democracy.

The author compares empirically, from the perspective of a comparative political scientist, political regime superiority of democracy over authoritarianism with regard to economic development.