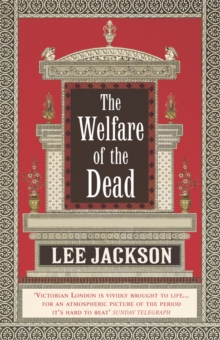 The welfare of the dead

Part of the Inspector Webb series

"Her arms were bare & milk white, her hands dainty and graceful: her smile as sweet as any I have ever seen.

An awful shame..." In the disreputable dance-halls and 'houses of accommodation' of 1870's London, a boastful killer selects his prey.

His crimes seem like random acts of malevolence, but Inspector Decimus Webb, promoted to the Detective Branch at Scotland Yard, is not convinced.

Webb begins to suspect a connection between the terrible murders, a mysterious theft at the Abney Park Cemetery, and a long-forgotten suicide.

His investigations lead him to the Holborn General Mourning Warehouse, devoted to the sale of 'Mourning for Families, In Correct Taste', and its proprietor, one Jasper Woodrow, a seemingly respectable businessman.

As Webb delves into Woodrow's life, he uncovers layer upon layer of deceit.

But can he unearth Jasper Woodrow's darkest secret in time to prevent another tragedy?

Lee Jackson's second Inspector Webb novel once again guides readers through the dark alley and gaslit parlours of 19th century London, in a suspense-filled gothic mystery, with the Victorian celebration of death at its morbid heart.