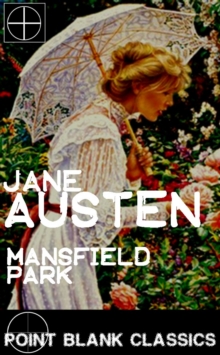 This Point Blank Classics edition includes the full original text as well as exclusive images exclusive to this edition and an easy to use interactive table of contents.

Mansfield Park is a novel by Jane Austen, written at Chawton Cottage between February 1811 and 1813.

It was published in May 1814 by Thomas Egerton, who published Jane Austen's two earlier novels, Sense and Sensibility and Pride and Prejudice.

When the novel reached a second edition in 1816, its publication was taken over by John Murray, who also published its successor, Emma.

The main character, Fanny Price, is a young girl from a large and relatively poor family, who is taken from them at age 10 to be raised by her rich uncle and aunt, Sir Thomas, a baronet, and Lady Bertram, of Mansfield Park.

She had previously lived with her own parents, Lieut.

She is the second child and eldest daughter, with seven siblings born after her.

She has a firm attachment to her older brother, William, who at the age of 12 has followed his father into the navy.

With so many mouths to feed on a limited income, Fanny's mother is grateful for the opportunity to send Fanny away to live with her fine relatives.

Mansfield Park is the most controversial of Austen's major novels.

Regency critics praised the novel's wholesome morality, but many modern readers find Fanny's timidity and disapproval of the theatricals difficult to sympathise with and reject the idea (made explicit in the final chapter) that she is a better person for the relative privations of her childhood.