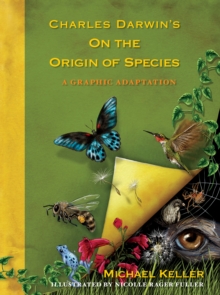 Charles Darwin's On the origins of species

Published 150 years ago, Charles Darwin's "On The Origin of Species by Means of Natural Selection, or the Preservation of Favoured Races in the Struggle for Life" caused an uproar from the moment it was released on 24th November 1859.

At once heralded for changing the course of science and condemned for its implied challenges to religion, few books have been as controversial or as historically significant.

In "On The Origin Of Species", author Michael Keller and illustrator Nicolle Rager Fuller introduce a new generation of readers to Darwin's groundbreaking treatise.

Drawing on the author's own words - and rarely seen letters he exchanged with this contemporaries - Keller and Fuller have produced an accessible, artfully rendered adaption of Darwin's masterwork.

Including sections about the primary research that led to "On The Origin of Species", the initial public response, and recent breakthroughs in evolutionary theory, this is a riveting, immersive read and is sure to breathe new life into Darwin's seminal and still polarising work.