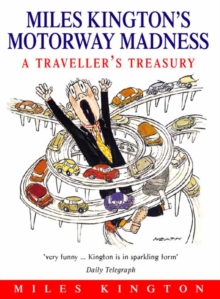 In soap opera, in verse, in quiz, period pastiche and children's fiction, Miles Kington's Motorway Madness is a book entirely devoted to the motorway.

Nobody has ever written a funny, literate and concentrated book about motorways.

This is it. The railway train shaped the nineteenth century, and gave birth to a huge amount of writing and speculation.

The motor car and the motorway have shaped the twentieth century, but there is nothing like the same heritage of motorway literature.

In fact, there isn't any at all. This is odd because the motorway is part of our lives.

All these familiar phrases are now part of our common consciousness.

We wake up screaming them in the middle of the night!

No book has yet tried to satisfy the itch for motorway musings.

In irrepressibly witty sketches and poems -- from a skit on the Famous Five to the Ballad of the Middle-Laner -- Miles Kington's Motorway Madness: A Traveller's Treasury will make people say half out loud: 'This is the book I've always wanted, without quite realising it or articulating the desire...'