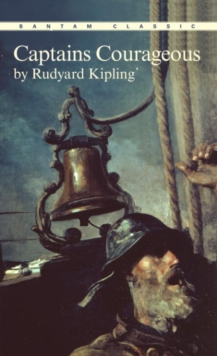 The only one of Kipling's novels to be cast in an American setting, Captains Courageous endures as one of literature's most cherished and memorable sea adventures.

Harvey Cheyne, spoiled millionaire's son, tumbles overboard from a luxury liner--only to be rescued by the crew of a Gloucester schooner.

Thus begins the boy's second voyage into the rugged rites and ways of sailors.

Like all Kipling's masterworks, Captains Courageous is an interweaving of art and moral purpose.

Angus Wilson has said that it shows delicacy of craft and violence of feeling, exactitude and wile impressionism, subtlety and true innocence.

A popular favorite since its first publication in 1897, the novel remains a classic story of youthful initiation--and a lively tribute to the author's famous code of bravery, loyalty, and honor among men.From the Paperback edition.