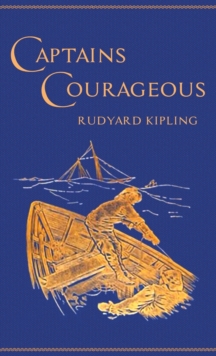 From British journalist, novelist, and poet Rudyard Kipling, Captains Courageous is a nautical adventure novel that follows the spoiled Harvey Cheyne Jr., who’s father is wealthy from the railroad business.

Harvey’s father takes him abroad on a business trip, but Harvey stirs up trouble and ends up falling overboard from the steamship. He is saved from drowning by a humble Portuguese fisherman off the Grand Banks of Newfoundland on the brink of death. Unable to convince the rest of the fishermen of his wealth in order to take him to the next port, Harvey hatches a new plan. Harvey accuses the ship’s captain, Disko Troop, of stealing his money, but after proving his innocence (and bloodying the boy’s nose) Disko Troop allows Harvey to become part of the crew until they return to port. Harvey is forced to accept that he will have to begin working until then as the only good outcome of his situation. Thus, he begins a new life full of trials and tribulations as he learns to become accustomed to the life of a fisherman.

With good humor, honest characters with honest troubles, and a bit of boyish wonder, Kipling has been able to write a tale that teaches us to be kind to everyone despite our perceived differences. Captains Courageous is a story of an adventure that demands character growth in all the right ways, and many of us can learn from Harvey’s journey at sea.