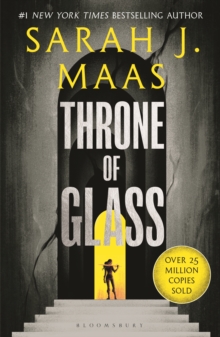 Part of the Throne of Glass series

Bloomsbury Childrens
1408832348 / 9781408832349
eBook (EPUB)
02/08/2012
Available
English
269 pages
Copy: 10%; print: 10%
Quiz No: 222807, Points 18.00, Book Level 5.70,
Middle Years Plus - Key Stage 3 Learn More
The first book inNew York Timesbestselling author Sarah J. Maas's sweeping fantasy saga - now available in hardcover with a new look to match the series!When magic has gone from the world, and a vicious king rules from his throne of glass, an assassin comes to the castle. She does not come to kill, but to win her freedom. If she can defeat twenty-three killers, thieves, and warriors in a competition to find the greatest assassin in the land, she will become the king's champion and be released from prison.Her name is Celaena Sardothien.The Crown Prince will provoke her. The Captain of the Guard will protect her. And a princess from a foreign land will become the one thing she never thought she'd have again: a friend. But something evil dwells in the castle-and it's there to kill. When her competitors start dying, horribly, one by one, Celaena's fight for freedom becomes a fight for survival, and a desperate quest to root out the source of the evil before it destroys her world.