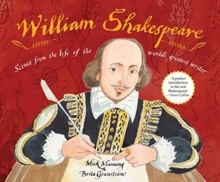 William Shakespeare : scenes from the life of the world's greatest writer

By: Manning, Mick,  Granstrom, Brita(Illustrated by)

The life of William Shakespeare is vividly depicted, from his birth in Stratford-upon-Avon in 1564, childhood and schooldays, through apprenticeship at his father' s glove-making shop, his marriage to Anne Hathaway, and then the move to London - where Will hones his skills as an actor-playwright for The Lord Chamberlain' s Men. When the newly-built Globe Theatre opens in 1599, Will Shakespeare is a key member of the company, and many of Shakespeare' s most famous plays are first performed here.

By his death in 1616, William Shakespeare is acknowledged as the master playwright of his age - and ever since as one of the greatest writers of all time. With lively graphic-novel descriptions of many of Shakespeare' s most famous plays, including A Midsummer Night' s Dream, The Merchant of Venice, Romeo and Juliet, Twelfth Night, Henry V, Hamlet, Macbeth, Othello and The Tempest, and drawing on the latest biographical research, this is the perfect introduction for children to the life and works of William Shakespeare.