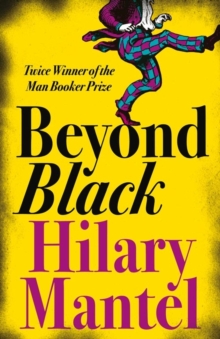 Fourth Estate Ltd
0007157762 / 9780007157761
Paperback
823.914
03/10/2005
13 in stock Need More ?
United Kingdom
English
General
20 cm 451 p.
general  Learn More
Reprint. Originally published: London: Fourth Estate.
/ Lead title An hilarious and sinister tale of dark secrets and secret forces in suburban England - Beyond Black is the new novel from the critically acclaimed author of Giving Up the Ghost. / Hilary Mantel is one of Britain's finest and most respected writers. / Beyond Black is her latest novel to appear since publication of Giving Up the Ghost, her much praised memoir. / Giving Up the Ghost has sold 10,000 copies in paperback in the UK. / Beyond Black received rave reviews in hardback, and has the potential to become a literary prizewinner.

An hilarious and sinister tale of dark secrets and secret forces in suburban England - "Beyond Black" is the new novel from the critically acclaimed author of "Giving Up the Ghost".

Alison Hart is a medium by trade: dead people talk to her, and she talks back.

With her flat-eyed, flint-hearted sidekick, Colette, she tours the dormitory towns of London's orbital road, passing on messages from dead ancestors: 'Granny says she likes your new kitchen units.' Alison's ability to communicate with spirits is a torment rather than a gift.

Behind her plump, smiling and bland public persona is a desperate woman.

She knows that the next life holds terrors that she must conceal from her clients.

Her days and nights are haunted by the men she knew in her childhood, the thugs and petty criminals who preyed upon her hopeless, addled mother, Emmie.

They infiltrate her house, her body and her soul; the more she tries to be rid of them, the stronger and nastier they become.This tenth novel by Hilary Mantel, the critically acclaimed author of "Giving Up the Ghost", is a witty and deeply sinister story of dark secrets and dark forces, set in an England that jumps at its own shadow, a country whose banal self-absorption is shot through by fear of the engulfing dark.