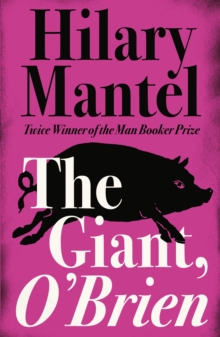 The Giant, O'Brien is based on the true story of the 18th Century Irish giant, Charles O'Brien, who was exhibited in London and eventually dissected by the surgeon Charles Hunter.

O'Brien's bones hang to this day in the Hunterian Museum in Lincoln's Inn Field, despite O'Brien's best endeavours to avoid such a fate.

Charles O'Brien, bard and giant. The cynical are moved by his flights of romance; the craven stirred by his tales of epic deeds.

But what of his own story as he is led from Ireland to seek his fortune beyond the seas in England?

The Surprising Irish Giant may be the sensation of the season but only his compatriots seem to attend to his mythic powers of invention.

None so low as Bitch Mary, and none so opportunistic as impressario Joe Vance, yet London shall make its mark on them all.

Just bodies. But even dead, London shall have them. John Hunter, celebrated surgeon and anatomist, buys dead men from the gallows and babies' corpses by the inch.

Where is a man to hide his bones when he is yet alive?The Giant, O' Brien is an unforgettable novel; lyrical, shocking and spliced with black comedy.