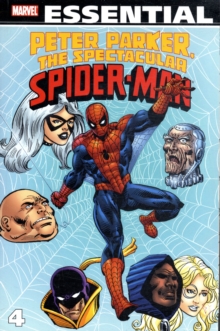 Part of the Essential series

The Black Cat's ready to give up crime for her Spider-sweetie - but in a gang war between Dr. Octopus and the Owl, good guys can end up hurt...Bad!

But Spider-Man's at his fighting best when things look worst - and with his heroine hospitalized, he's readier than ever to clean Doc Ock's clock!

Back on her feet, the Cat convinces Spider-Man they can be a crimefighting couple - but are the likes of the Hobgoblin, the Fly, the Cobra and Mr. Hyde too much for her? Unexpectedly, Spider-Man's off to the end of the universe for the Secret Wars - but while the spider's away, the cat will...what?

The Spidey/Cat relationship's meltdown begins here! Plus: the Kingpin and the Blob! Journalistic jeopardy with J. Jonah Jameson! The Punisher gone madder than usual! Secrets from Aunt May's youth, with a rare flashback to Spidey's Uncle Ben! And, yes, the credits said Fred Hembeck! Guest-starring Cloak and Dagger! This title also features the "Fantastic Four" and the "Avengers"!