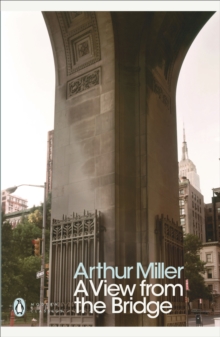 A view from the bridge : a play in two acts

Arthur Miller's play A View from the Bridge is a tragic masterpiece of the inexorable unravelling of a man, set in a close-knit Italian-American community in 1950s New York.

Eddie Carbone is a longshoreman and a straightforward man, with a strong sense of decency and of honour.

For Eddie, it's a privilege to take in his wife's cousins, Marco and Rodolpho, straight off the boat from Italy.

But, as his niece Catherine begins to fall for one of them, it's clear that it's not just, as Eddie claims, that he's too strange, too sissy, too careless for her, but that something bigger, deeper is wrong - and wrong inside Eddie, in a way he can't face.

Something which threatens the happiness of their whole family. This Penguin Classics edition includes an introduction by the author and a new foreword by actor Philip Seymour Hoffman.