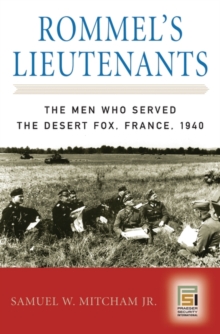 Rommel's lieutenants : the men who served the Desert Fox, France, 1940

Perhaps the most famous and most admired soldier to fight in World War II was Field Marshal Erwin Rommel, who achieved immortality as "the Desert Fox." But before taking up his legendary command of the Afrika Korps, Rommel led the 7th Panzer Division - known as the 'Ghost Division' - in 1940.

During this campaign, the 7th Panzer suffered more casualties than any other division in the German Army, but in the process, inflicted a disproportionate amount of casualties upon the enemy.

It destroyed the French 1st Armored Division and the 4th North African Division, punched through the Maginot Line extension near Sivry, and checked the largest Allied counteroffensive of the campaign at Arras.

By the time France surrendered, Rommel had proven himself a great military leader who was capable of greater things.

But Rommel had a great deal of help in France - and much more than his published papers suggest.

His staff officers and company, battalion and regimental commanders were an extremely capable collection of military leaders who included 12 future generals, and two colonels who briefly commanded panzer divisions but never reached general rank. No historian has previously recognised the talented cast of characters who supported the Desert Fox in 1940.

No one has ever attempted to tell their stories. The purpose of this book is to remedy this deficiency.