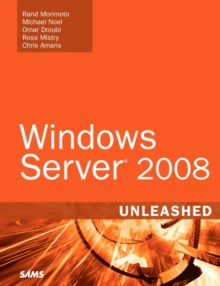 Windows Server 2008 Unleashed covers the planning, design, prototype testing, implementation, migration, administration, and support of a Windows 2008 and Active Directory environment, based on more than three and a half years of early adopter experience in full production environments. This book addresses not only what is new with Windows 2008 compared to previous versions of the Windows Server product, but also what is different and how the similarities and differences affect an organization's migration to Windows 2008. Chapters are dedicated to the migration process from Windows 2000/2003 to Windows 2008, how to properly use Group Policies in Windows 2008, and tips and tricks on managing and administering a Windows 2008 environment.

Detailed information on how to…