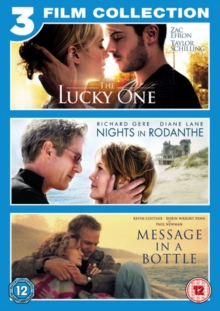 Triple bill of romantic dramas adapted from the novels by Nicholas Sparks.

In 'The Lucky One' (2012) US Marine Sergeant Logan Thibault (Zac Efron) returns from his third tour of duty in Iraq clutching a photograph of a woman he has never met, which he has come to see as the good luck charm that has kept him alive.

After some investigation he learns that the woman's name is Beth (Taylor Schilling), finds out where she lives and ends up getting a job at the kennels run by her family.

Despite Beth's initial skepticism and various obstacles in her life, the two gradually become closer, leading Logan to hope that Beth could become far more to him than just a good luck charm.

In 'Nights in Rodanthe' (2008) Adrienne Willis (Diane Lane) retreats to the small coastal town of Rodanthe in North Carolina to take stock of her life and decide whether or not to continue with her unhappy marriage.

The only other resident at her guest house is Dr Paul Flanner (Richard Gere), who has travelled to the town in an attempt to reconcile with his estranged son.

As a major storm engulfs the town, the two find solace in each other, and so begins a romance that will alter the course of both their lives.

In 'Message in a Bottle' (1999) Theresa Osborne (Robin Wright Penn) is a successful journalist who discovers a bottle washed up upon the shore.

The bottle contains a heartfelt love letter to an unknown woman called Catherine and signed 'G'.

Theresa publishes the letter in the Chicago Tribune, and it transpires that other letters have been found, presumably by the same author.

When Theresa investigates further, she tracks down the writer of the letters, a sailboat builder named Garret Blake (Kevin Costner), whose wife died two years ago during childbirth.

A tentative romance develops between Garret and Theresa, but he remains unaware that she knows of the lost letters and that she was the journalist who published them...