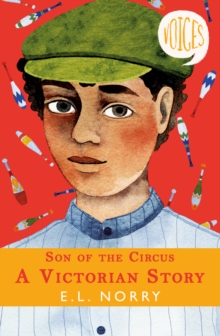 Son of the circus : a Victorian story

Son of the circus : a Victorian story

Part of the VOICES series

Voices: Son of the Circus - A Victorian Story explores the life of a young mixed-race boy, Ted, living with his mother and poorly older brother in Victorian Bradfield. When a stranger, a man the boys don't remember ever seeing before, appears in their kitchen, Ted is hit with a shocking revelation. This man is his father - the first black circus owner in Victorian Britain, Pablo Fanque. Before Ted can recover from his shock, he is sent away with Pablo to learn the tricks of the circus trade.

Pablo is determined for Ted to follow in his footsteps. But can Ted adapt to this terrifying new life amongst strangers? And will he ever see his beloved mother and brother again? Fresh new voice, E. L. Norry, continues this exciting new series that explores authentic and moving accounts of the life of British immigrants throughout history.

Norry shows us a fascinating and rarely seen world that's sure to hook young readers. *** 'E. L. Norry's Son of the Circus is perfect for children with an itch to run away to spit and sawdust and rearing horses, in a fictionalised account of Pablo Fanque, the first black circus proprietor in Victorian Britain. A joy of a book: exciting and brilliantly vivid.' -Katherine Rundell ABOUT THE SERIES: VOICES A thrilling series showcasing some of the UK's finest writers for young people Voices reflects the authentic, unsung stories of our past Each shows that, even in times of great upheaval, a myriad of people have arrived on this island and made a home for themselves - from Roman times to the present day Perfect for teaching children about inclusivity and diversity.