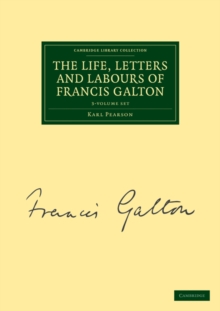 The Life, Letters and Labours of Francis Galton 3 Volume Set in 4 Pieces

A controversial figure, Sir Francis Galton (1822-1911), biostatistician, human geneticist, eugenicist, and first cousin of Charles Darwin, is famed as the father of eugenics.

Believing that selective breeding was the only hope for the human race, Galton undertook many investigations of human abilities and devoted the last few years of his life to promoting eugenics.

Although he intended his studies to work positively, for eradicating hereditary diseases, his research had a hugely negative impact on the world which subsequently bestowed on Galton a rather sinister reputation.

Volumes 1 and 2 are primarily biographical. Volume 3, published in two parts, focuses on Galton's later research on correlation, personal identification, and eugenics, and includes records of Galton's travels and occupations, and recollections of friends and family.