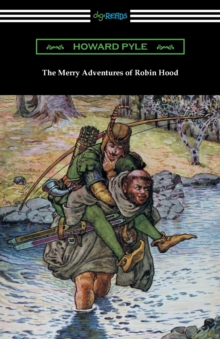 The Merry Adventures of Robin Hood

First published in 1883, Howard Pyle's "The Merry Adventures of Robin Hood" is arguably the most popular rendering of the legend of Robin Hood, the yeoman-thief of Sherwood Forest. Each chapter offers new and exciting stories, including the famous scenes of Little John and his staff besting Robin on the bridge, Robin winning the golden arrow at the Sheriff of Nottingham's archery contest, his complicity with courageous Will Scarlet and musical Alan-a-Dale, the continual outsmarting of the Sheriff, and many others. This timeless children's classic transforms the sly Robin Hood of medieval ballads into a hero who exemplifies justice, fair play, generosity, and compassion. Beautifully illustrated with Pyle's original artwork, no other version of the Robin Hood legend has received as much veneration and enjoyment from readers of all ages in the past one hundred years as has this 19th century classic. This edition is printed on premium acid-free paper.