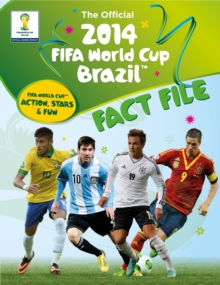 Nothing beats the sporting spectacle of the FIFA World Cup and this official guide, aimed at younger readers, contains everything they need to become true 2014 FIFA World Cup experts.

There are easy-to-follow World Cup team analyses and star player profiles, complemented by outstanding big match photographs in what is the only official FIFA-endorsed 2014 World Cup companion for children.

The official 2014 FIFA World Cup Brazil Fact File is written in an informative yet accessible style to appeal to young football fans.

Illustrated with 100 amazing images and appealing to all ages, all 32 finalists are featured together with profiles of star players including Lionel Messi, Andres Iniesta, Cristiano Ronaldo and Wayne Rooney.

There is the chance to meet Fuleco, the Brazilian three-banded armadillo, the official FIFA World Cup 2014 mascot, read special features on the stadium, complete the fill-in progress chart and solve the many fun puzzles, quizzes games, all based around the World Cup.

In fact there is everything young fans need to know about football's top tournament and keep them entertained throughout the entire World Cup.