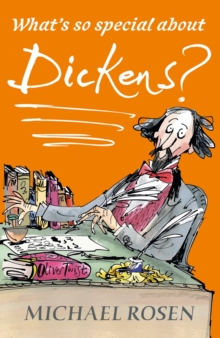 What's so special about Dickens?

What's so special about Dickens?

By: Rosen, Michael,  Nayler, Sarah(Illustrated by)

Dickens brought life to some of our favourite characters: his rogues' gallery includes the Artful Dodger and his avaricious boss, Fagin, the miserly Mr Scrooge, and the spiteful Miss Havisham.

During Dickens's lifetime, his novels sold in their thousands, and his touring one-man show was an international hit.

Now, 145 years after his death, Dickens's fame has only grown – his books are read all over the world, and have been adapted for both stage and screen.

So what is it about Dickens's writing that keeps his readers coming back for more?

Join Michael Rosen on a whistle-stop tour of Dickensian London.

Featuring a richly detailed summary of Dickens's childhood and career, a witty recap of his best-known novels, and lively black-and-white illustrations from Sarah Nayler, this book is the perfect introduction to the work and world of Charles Dickens.