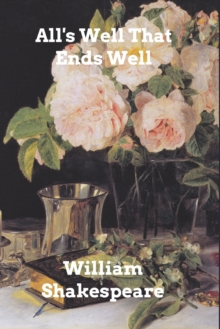 All's Well That Ends Well is a play by William Shakespeare, published in the First Folio in 1623, where it is listed among the comedies.

There is a debate regarding the dating of the composition of the play, with possible dates ranging from 1598 to 1608. Bertram is compelled to marry Helena. Bertram refuses to consummate their marriage. He goes to Italy. In Italy he courts Diana. Helena meets Diana. They perform the bed trick. The play is considered one of Shakespeare's "problem plays", a play that poses complex ethical dilemmas that require more than typically simple solutions.