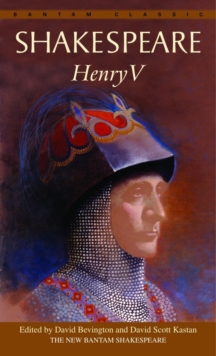 By: Shakespeare, William,  Bevington, David(Edited by),  Kastan, David Scott(Edited by)

A triumphantly patriotic play that also casts a critical eye at war and warriors, this great epic drama depicts a charismatic ruler in a time of national struggle.

The young King Henry's victory over the French despite overwhelming odds creates a spectacle of action, color, and thundering battles.

Whether the warrior-king is urging his men ';Once more unto the breach, dear friends,' or wooing Katharine of France, Henry is magnificently adapted to the role he must play in England's greatness.

Henry V represents the culmination of Shakespeare's art as a writer of historical drama.Each Edition Includes:*; Comprehensive explanatory notes *; Vivid introductions and the most up-to-date scholarship *; Clear, modernized spelling and punctuation, enabling contemporary readers to understand the Elizabethan English*; Completely updated, detailed bibliographies and performance histories *; An interpretive essay on film adaptations of the play, along with an extensive filmographyFrom the Paperback edition.