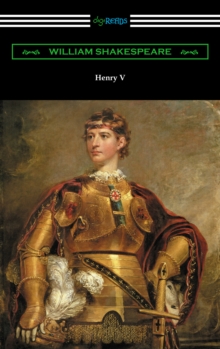 The play focuses on the events surrounding the Battle of Agincourt during the Hundred Years' War.

Henry, who is introduced in the earlier plays as a wild and undisciplined youth, has now come of age and ascended to the thrown following the death of his father, King Henry IV.

At the outset of the play we find the English fleet embarking for France in pursuit of conquest of the nation just across the English Channel.

At this time a plot to assassinate the King by the Earl of Cambridge and two others is discovered.

Henry's cleverness in uncovering the plot and the ruthlessness in which he deals with the conspirators exhibits that his immaturity of youth, exhibited in earlier plays, has now past and that he has grown into a competent monarch. &quoteHenry V&quote, along with the other plays of the tetralogy, provides an incredible dramatic portrayal of an important chapter in the long military conflict between two of the most powerful of European nations, England and France.

This edition includes a preface and annotations by Henry N.

Hudso, an introduction by Charles H. Herford, and a biographical afterword.